Welcome!
Close
Would you like to make this site your homepage? It's fast and easy...
Yes, Please make this my home page!
No Thanks
Don't show this to me again.
Close


Nicknamed Zahidah (abstemious) and 'Abidah (devoted)
It was five years after the Muslims had accompanied the Prophet (PBUH&HF) and his family in the migration (Hijra) to Medina, when the Holy Prophet's daughter, Syeda Fatima (AS), gave birth to a little girl.' named ZAINAB. 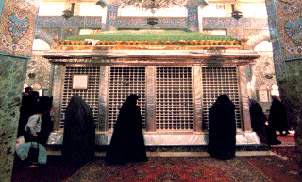 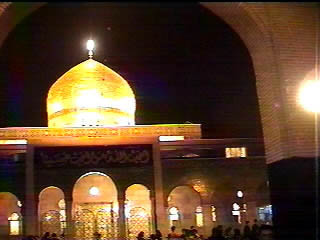 In the name of Allah the, the Beneficent, the Merciful.
All praise is due to Allah, the Lord of the Universe, Allah's blessings be on His Messenger's Family altogether.
Allah says: "Then the end of those who do evil deeds is that they reject the verses of Allah and ridicule them". (Qura'n 30:10)
Oh Yazid! Do you think that by making us prisoners in such a way that we are being taken from one place to another in humiliation - do you think that by this you have humiliated us in the sight of Allah and have earned respect for yourself?
This apparent success of yours is the result of grandeur of your might and lofty status for which you are proud.
You feel that you have conquered the whole world and your affairs are organised and that our domain is now under you control
And are you forgetting that Allah has said: "Surely those who have bought unbelief at the price of faith shall do no harm at all to Allah, and they shall have a painful chastisement". (Qura'n 3:177)

It was five years after the Muslims had accompanied the Prophet (pbuh&hf) and his family in the migration (Hijrah) to Medina, when the Holy Prophet's daughter, Bibi Fatima(s.a.), gave birth to a little girl. When her father, Imam Ali(a.s.), saw his daughter for the first time Imam Hussain(a.s.), who was then almost three years old, was with him. The boy exclaimed in delight, "O father, Allah has given me a sister." Hearing those words Imam Ali (a.s.) began to weep, and when Imam Hussain(a.s.) asked why he was crying so, his father answered that he would soon come to know.

Bibi Fatima(s.a.) and Imam Ali(a.s.) did not name their child until a few days after her birth, for they awaited the Prophet(pbuh&hf) to return from a journey so that he could propose the name. When finally the baby girl was brought before the Prophet(pbuh&hf), held her in his lap and kissed her. The Angel Jibra'il came to him and conveyed the name that was to be hers, and then he began to weep. The Prophet (pbuh&hf) asked why Jibra'il wept and he answered, "O Prophet of Allah. From early on in life this girl will remain entangled in tribulations and trials in this world. First she will weep over your separation (from this world); thereafter she will bemoan the loss of her mother, then her father, and then her brother Hassan. After all this she will be confronted with the trials of the land of Karbala and the tribulations of that lonely desert, as a result of which her hair will turn grey and her back will be bent."

When the members of the family heard this prophecy they all broke down in tears. Imam Hussain(a.s.) now understood why earlier his father had also wept. Then the Prophet (pbuh&hf) named her Zainab(s.a.). When the news of the birth of Bibi Zainab(s.a.) reached Hazrat Salman al-Farsi(a.r.), he went to Imam Ali(a.s.) to congratulate him. But instead of seeing him happy and rejoicing he saw Imam Ali(a.s.) shed tears, and he too was apprised of the events of Karbala and the hardships that were to befall Bibi Zainab(s.a.).

One day, when Zainab(s.a.) was about five years old, she had a strange and terrible dream. A violent wind arose in the city and darkened the earth and the sky. The little girl was tossed hither and thither, and suddenly she found herself stuck in the branches- of a huge tree. But-the wind was so strong that it uprooted the tree. Bibi Zainab(s.a.) caught hold of a branch but that broke. In a panic she grabbed two twigs but these too gave way and she was left falling with no support. Then she woke up. When she told her grand father, the Prophet(pbuh&hf), about this dream he wept bitterly and said, "O my daughter. that tree is me who is shortly going to leave this world. The branches are your father Ali(a.s.) and your mother Fatima Zahra(s.a.), and the twigs are your brothers Hassan(a.s.) and Hussain(a.s.). They will all depart this world before you do, and you will suffer their separation and loss."

Bibi Zainab(s.a.) shared with-her brothers and sister the extraordinary position of having such examples to look up to, emulate and learn from, as her grand father, Prophet Mohammad(pbuh&hf) her mother Bibi Fatima(s.a.), daughter of the Prophet, and her father Imam Ali (a.s.), cousin-brother of the Prophet. In the pure environment that enveloped her she absorbed the teachings of Islam that her grandfather imparted, and after him her father. Here too she learnt to master all household skills with great proficiency.

She had barely attained the tender age of seven when her beloved mother passed away. Her mother's death had closely followed her cherished grand father's passing away. Some time later Imam Ali(a.s.) married Bibi Umm ul-Banin(a.s.), whose devotion and piety encouraged Bibi Zainab(s.a.) in her learning.

Her training and marriage

Whilst still a young girl she was fully able to care for and be responsible for the running of her father's household. As much as she cared for the comforts and ease of her brothers and sisters, in her own wants she was frugal and unstintingly generous to the poor, homeless and parentless. After her marriage her husband is reported as having said, "Zainab is the best housewife."

From very early on she developed an unbreakable bond of attachment to her brother Imam Hussain(a.s.). At times when as a baby in her mother's arms she could not be pacified and made to stop crying, she would quieten down upon being held by her brother, and there she would sit quietly gazing at his face. Before she would pray she used to first cast a glance at the face of her beloved brother.

One day Bibi Fatima(s.a.) mentioned the intensity of her daughter's love for Imam Hussain(a.s.) to the Prophet(pbuh&hf). He breathed a deep sigh and said with moistened eyes, "My dear child. This child of mine Zainab(s.a.) would be confronted with a thousand and one calamities and face serious hardships in Karbala."

In her character she reflected the best attributes of those who raised her. In sobriety and serenity she was likened to Umm ul-Muminin Khadija(a.s.), her grandmother; in chastity and modesty to her mother Bibi Fatima Zahra(s.a.); in eloquence to her father Imam Ali(a.s.); in forbearance and patience to her rother Imam Hassan(a.s.); and in bravery and tranquility of the heart to Imam Hussain(a.s.). Her face reflected her father's awe and her grandfather's reverence.

When the time came for marriage, she was married in a simple ceremony to her first cousin, Abdullah ibn Ja'far Tayyar(a.s.). Hazrat Abdullah(a.s.) had been brought up under the direct care of the Prophet(pbuh&hf). After his death, Imam Ali(a.s.) became his supporter and guardian until he came of age. He grew up to be a handsome youth with pleasing manners and was known for his sincere hospitality to guests and selfless generosity to the poor and needy. Together this young couple had five children, of whom four were sons, Ali, Aun, Muhammad, and Abbas, and one daughter, Umm Kulthum.

In Medina it was Bibi Zainab(s.a.)'s practise to hold regular meetings for women in which she shared her knowledge and taught them the precepts of the Deen of Islam as laid out in the Holy Quran. Her gatherings were well and regularly attended. She was able to impart the teachings with such clarity and eloquence that she became known as Fasihah (skillfully fluent) and Balighah (intensely eloquent).

In the thirty-seventh year A.H. (after Hijrah), Imam Ali(a.s.) moved to Kufa to finally take up his rightful position as khalifah. He was accompanied by his daughter Bibi Zainab(s.a.) and her husband. Her reputation as an inspiring teacher among the women had preceded her. There too women would throng to her daily sittings where they all benefitted from her erudition, wisdom and scholarship in the exegesis of the Quran.

The depth and certainty of her knowledge earned her the name given to her by her nephew, Imam Ali Zayn ul-Abidin(a.s.), of 'Alimah Ghayr Mu'allamah, 'she who has knowledge without being taught'.

Bibi Zainab(s.a.) was also nicknamed Zahidah (abstemious) and 'Abidah (devoted) because of her abstemiousness and piety. She found little of interest in wordly adornments, always preferring the bliss and comfort of the Next World over that of this world. She used to say that for her the life of this world was as a resting place to relieve fatigue along a journey.

Zainab (AS) shared with her brothers and sister the extraordinary position of having such examples to look up to, emulate and learn from, as her grand father, the Prophet of Allah (PBUH&HF) her mother Fatima (AS), daughter of the Prophet, and her father Imam Ali (AS), cousin-brother of the Prophet. In the pure environment that enveloped her she absorbed the teachings of Islam that her grandfather imparted, and after him her father. Here too she learnt to master all household skills with great proficiency.
In her character she reflected the best attributes of those who raised her. In sobriety and serenity she was likened to Umm ul-Muminin Khadija, her grandmother (AS); in chastity and modesty to her mother Fatima Zahra (AS); in eloquence to her father Ali (AS); in forbearance and patience to her brother Imam Hassan (AS); and in bravery and tranquillity of the heart to Imam Hussein (AS). Her face reflected her father's awe and her grandfather's reverence.
When the time came for marriage, she was married in a simple ceremony to her first cousin, Abdullah ibn Ja'far Tayyar. Abdullah had been brought up under the direct care of the Prophet. After the demise of the Prophet, Imam Ali (AS) became his supporter and guardian until he came of age. Abdullah grew up to be a handsome youth with pleasing manners and was known for his sincere hospitality to guests and selfless generosity to the poor and needy.
Together this young couple had five children, of whom four were sons, Ali, Aun, Muhammad, and Abbas, and one daughter, Umm Kulsoom.

After the massacre of Imam Hussein (a.s.) at Karbala, the forces of Yazid took the children and the women as prisoners. They were taken from Karbala to Kufa and from Kufa to Damascus, the capital and stronghold of Umayyid power.
In Damascus, the women and children were presented into the court of Yazid. Yazid had assembled all the dignitaries and officers of his capital for that occasion. When the prisoners where brought in, they saw that Imam Hussein's head was at the foot of Yazid's throne. Yazid was joyfully reciting some poems in which he openly rejected the Prophethood of Prophet Muhammad (s.a.w.) and called on his ancestors (who were killed by the Muslim army in the battle of Badr) to witness the revenge which he had extracted from the family of the Prophet.
It was under such emotionally charged circumstances that Sayyida Zainab, the courageous daughter of a courageous father, stood up and gave a very moving speech in response to Yazid's statements.
Her Khitab at Darbar-e-Sham after Imam HUSSAINas was massacre